What: Action NC will host a movie and discussion about the consequences of passing anti-immigrant laws and what we as a community can do to prevent it.

Why: As many of you have already heard, the NC House Select Committee on the State's Role in Immigration Policy published their report yesterday (December 6). According to the report, the House Select Committee has decided not to propose as a committee any anti-immigrant legislation for 2013. But, they left the door open for individual legislators.

According to an article that came out this morning on the conservative John Locke Foundation's "flagship media program":

Rep. George Cleveland, R-Onslow. . . said he hopes that the General Assembly will revisit a couple of bills he’s supported in the past. Those include one that would prohibit North Carolina police or other government officials from accepting the matricula consular card for identification purposes. Mexican consulates generally issue such cards for Mexican nationals living in the United States.

Another bill Cleveland hopes would gain traction next year is one requiring contractors and subcontractors with municipalities to use the federal E-Verify system when hiring employees.

Legislation that attacks our immigrant population is bad for North Carolina (economically and socially). 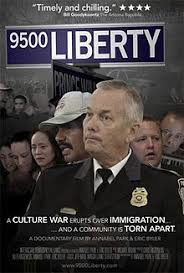 9500 Liberty documents the first time in U.S. history that an Arizona-style immigration law was actually implemented—and the surprising grassroots opposition that led to its repeal.

Racial tension and threats of violence erupt when Prince William County, Virginia adopts a law requiring the police to question people who appear to be undocumented immigrants. Supporters of the law ride a wave of hysteria to an election victory. But many reconsider when the local economy feels the impact of a sudden exodus of workers, consumers, and business owners. Despite fears of reprisal, a group of concerned citizens launches a “virtual resistance” using social media, setting up a final showdown with the law’s ferocious advocates.